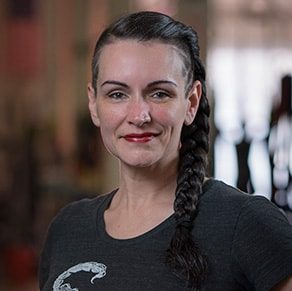 Mandy Trichell always hated exercise. HATED it. Years of being the first one pummeled in dodge ball and the last one picked for kickball will do that to a person. She never played team sports in school, never practiced a martial art and could barely tolerate wrestling with her little brother as a kid. She went out of her way to avoid having to do anything physical.

In spring of 2005, at the age of 29, Mandy (very) reluctantly started working out when she realized her sedentary life had caught up with her. With an extra 50 pounds weighing her down, a new job and three children to keep up with, something had to change. Over the next few years, movement became a priority for Mandy. In addition to losing weight and gaining energy, her new passion was directly responsible for resolving several other issues she had been struggling with for years: clinical depression, insomnia, and chronic fatigue. This led her to get more interested in the why and how of fitness. As she learned more and shared more with people who asked, they began asking if she would work with them. This finally led Mandy to becoming a Certified Personal Trainer.

Mandy has now been been training professionally since 2007. She is certified by the National Academy of Sports Medicine. She is also ADAPT L1 (parkour) and MovNat L2 certified, and is the co-founder of Urban Movement. She is devoted to helping people get those benefits and rewards that she loves so much from exercise. Beyond keeping her well, both mentally and physically, she feels it gives her the child-like energy that makes her feel unstoppable. It brings Mandy great joy to share that with other people and to help them reach their goals.